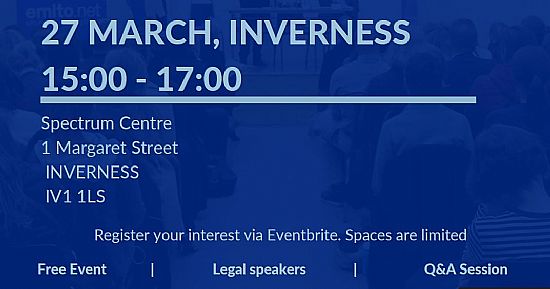 We have received the follwing message from the Citizen's Rights Project:

Citizens’ Rights Project, in collaboration with Citizens Advice Scotland (CAS), will be offering a further series of briefing events in March about Brexit, citizens’ rights and the EU settlement Scheme for local authorities and national organisations supporting EU/EEA citizens and their family members.

You can register your interest here.

Attendees will be signposted to any relevant materials and support tools, such as Home Office toolkits, and specific advice services for citizens who need to apply to the EU Settlement Scheme.

If you have received enquiries about these matters, we hope that these events will provide you with useful information on these issues.

These free briefing sessions will:

I hope that your organisation will be represented at this event. Please feel free to book as many places as you like. Additionally, if you know any other organisations that you think would benefit from attending, please do forward this email on to them.

If you have any questions, please contact our project team at info@citizensrightsproject.org 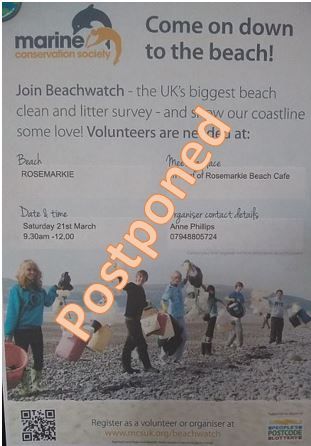 We have received the following from the Highland Council. Please make your views directly to them. The views of FRCC will be published after the March Community Council Meeting: 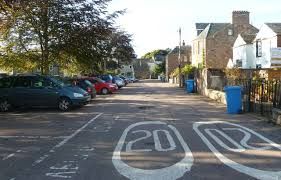 In October 2019, the Council agreed a new policy to consider the introduction of charging in off-street car parks.  There are several reasons for this new policy:

A key aim of the new policy is to provide a clear and transparent way to consider the introduction of charges.  It is a statutory process which includes the publication of a draft traffic order.  Consultation with the public is central to the new approach. This process includes a period of pre-engagement with key stakeholders followed by public consultation on the draft proposals.

For the Black Isle area, this is the start of the pre-engagement process.  The information pack attached sets out background and information to the process along with the details of each proposal for each individual car park site within the area.

Key stakeholders are being asked to comment on draft proposals for car park sites within your area.  It is not anticipated that you will want to comment on all the locations but only for those relevant to your local community.  The information you provide will help inform the draft proposals and the following consultation process.

The pre-engagement process will run from Monday 2nd March 2020 until Monday 30th March 2020.  Please submit your answers using our online survey, accessible via this link: https://www.surveymonkey.co.uk/r/ward9

Additionally, you can submit your views on the attached word document and return this to carparkconversation@highland.gov.uk

Should you have any queries regarding the process, please email carparkconversation@highland.gov.uk

29 February 2020Give your views on the Munlochy Junction

I am writing to invite you to participate in a consultation about road safety improvements at the B9161/A9 Munlochy junction.

Please find below a link to a short online survey:

Please feel free to share this survey with friends, family, and others you know who are regular users of the road.

The responses to this survey are anonymous and will be fed into the summit meeting at the end of March.

Paper copies of the survey are available from my constituency office. If you would like to fill in a paper copy, please feel free to drop into my office to collect one (12 High Street, Dingwall, IV15 9RU), or phone 01349 863 888 and ask to speak to my caseworker Philip Coghill.

I am happy to keep you informed of any further updates on this matter. 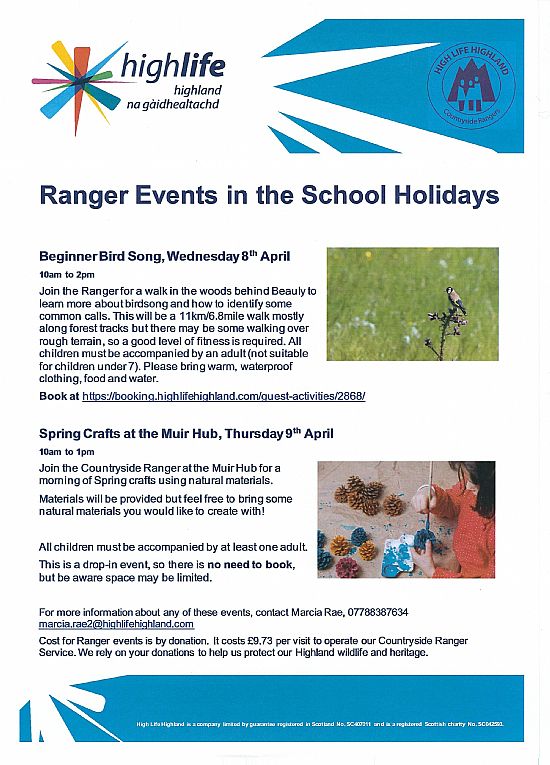 Buiding works will commence at Fortrose Health Centre on Monday 2nd March. The cahnges are shown on the Drawing available HERE  whilst the neighbourhood notification may be seen below: 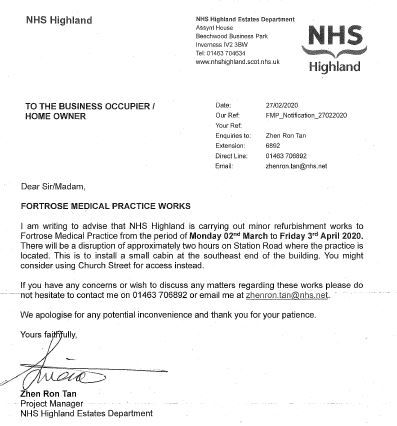 celebrations ourselves but would support anyone wishing to do so. 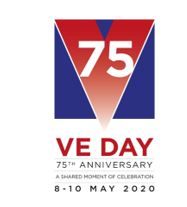 A UNIQUE OPPORTUNITY TO PAY TRIBUTE

VE Day 75 provides an exceptional opportunity to pay tribute to the millions of women who contributed so much to the war effort during 1939-45. They played such a vital role during the years of conflict, with the vast majority of them not knowing if their husbands, sons, daughters and sweethearts would ever return home during or after the war ended.

So let us ALL ensure that the VE Day 75 celebrations on the 8th May this year recognise and thank the many millions of women throughout the United Kingdom, Channel Islands, Isle of Man and other allied countries around the world who worked so tirelessly, and sacrificed so much during WWII.

As part of our celebrations, four young women will climb the four highest Peaks in the United Kingdom – Ben Nevis, Scotland; Mount Snowdon, Wales; Scafell Pike, England, and Slieve Donard, Northern Ireland.  When reaching the top of their Peak at 3pm on the 8th May, they will undertake the 'Nation's Toast to the Heroes of WWII' on behalf of women around the world. It will be the first time such an undertaking has occurred so we applaud their initiative.

We would therefore, like the communities throughout Scotland to encourage the women within their communities to pay a personal tribute to their courageous forebears by raising a glass or another refreshment of their choice and carry out the 'Nation's Toast to the Heroes of WWI' at a location of their preference at 3pm on the 8th May. Let us ALL ensure the important part played by women during WWII is truly celebrated and NOT forgotten.

This event also provides a unique opportunity for local communities to involve the various homes for the elderly within local areas too, ensuring they feel part of the celebrations on 8th May this year.

VE Day 75, over the VE Day 75 Weekend of 8th - 10th May 2020, will be an international celebration of peace – a time to remember, reflect and pay tribute to the millions of people who played such a vital part in achieving it. This includes armed forces personnel from many countries who gave their lives or were physically and mentally injured; the hard-working women and men who kept the factories, mines, shipyards and farms operating; the ARP wardens, police officers, doctors, nurses, firemen, local defence volunteers and many others who safeguarded the home front.

The following series of commemorative events over the weekend will recognise the contributions of everyone during WWII, while raising valuable funds for our charity partner, SSAFA the Armed Forces Charity, which has been supporting service personnel, veterans and their families since 1885.

For further information and those wishing to take part, along with registering their involvement, please go to the VE day 75 website – www.veday75.org and register your/their event by NO later that 30th April to enable us to keep in touch with them, along with informing the media of your/their involvement nearer the time.

We have received an update from Parklands Homes on the Construction of the Care Home in Fortrose. The Full update is available HERE

The construction is expected to be completed in mid-June weather permitting and the works on the sewer drainage by the end of February.

A Register of the Assets of the Fortrose and Rosemarkie Common Good has been published by the Highland Council . It is available for download HERE 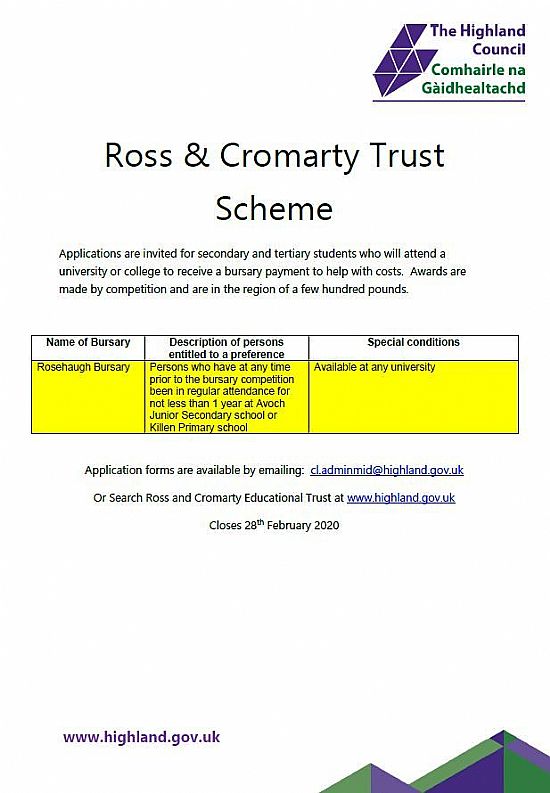 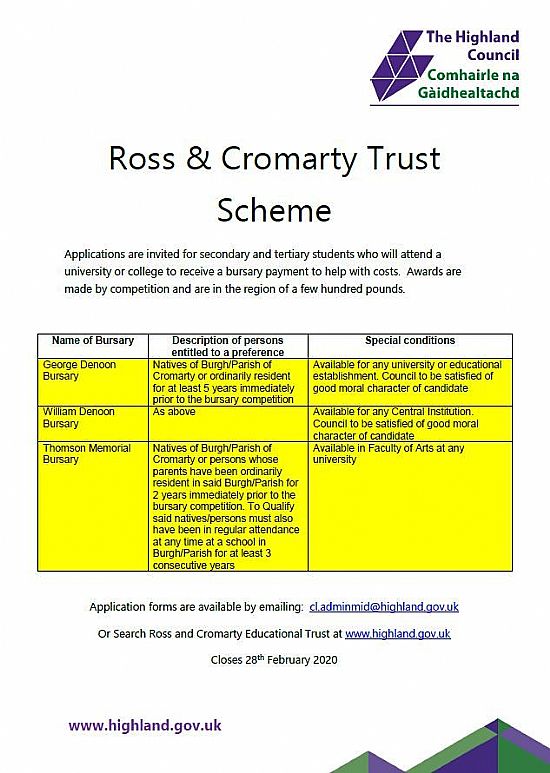 23 January 2020Report of Performance of the Highland Council

Periodically the Accounts Commission, acting for the Scottish Government assess the performance of the Highland Council. Their latest report is now available HERE. 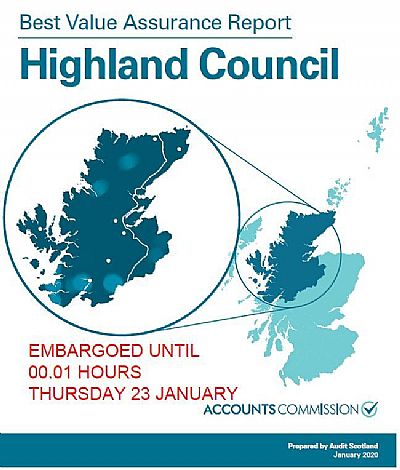 The summary findings of the report are:

1 The Commission accepts the Controller of Audit’s report on Best Value
in Highland Council. We endorse the recommendations set out by the
Controller of Audit in his report and expect the council to act upon
them and demonstrate improvement in the next 12 months.
2 We are disappointed with the progress made by the council since our
previous Best Value audit in 2010.
3 We are concerned in particular that the council is not demonstrating
that it is financially sustainable. In recent years the council has a poor
record of meeting budget gaps, and thus it is critical that it meets
a forecast budget gap of up to £77.3 million in the two years from
2020/21. Recent improvements in financial governance and controls
will be vital in delivering this requirement.
4 We note with concern the Controller’s conclusion that the council is not
demonstrating all aspects of Best Value, but we acknowledge that there
has been an increase in the pace of the change required to do this. We
underline that the council needs to get better at its self-evaluation to
be clearer about how it can improve. It is disappointing for example
to note poor service performance, not least in the priority area of
education.
5 Difficult decisions lie ahead for the council, requiring effective
leadership. We therefore urge elected members to continue to work
constructively together with officers and communities. Recent changes
to decision-making and scrutiny structures will be integral to this, as
will members making use of better quality performance information to
fulfil their responsibilities.
6 We note recent and ongoing changes to senior officer team and
structure and we encourage the collaborative leadership required with
members to maintain an increasing pace of change. The ownership
and involvement of all staff in continuous improvement is another vital
element in moving forward.
7 The Commission acknowledges the significant challenges of the
geography and diversity of the Highlands. Given this context, we urge
better progress by the council to work with its partners in delivering
their community empowerment and locality planning obligations.
8 The nature of the Controller’s recommendations are significant and it
is vital that the council takes these forward to deliver Best Value. The
Commission will therefore maintain a close interest in how the council
moves forward. We ask the Controller of Audit to monitor this through
the annual audit and keep the Commission informed accordingly. 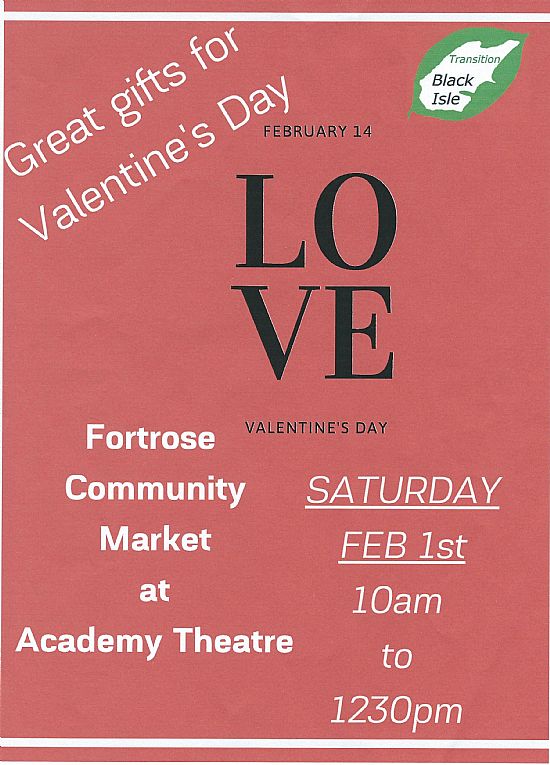 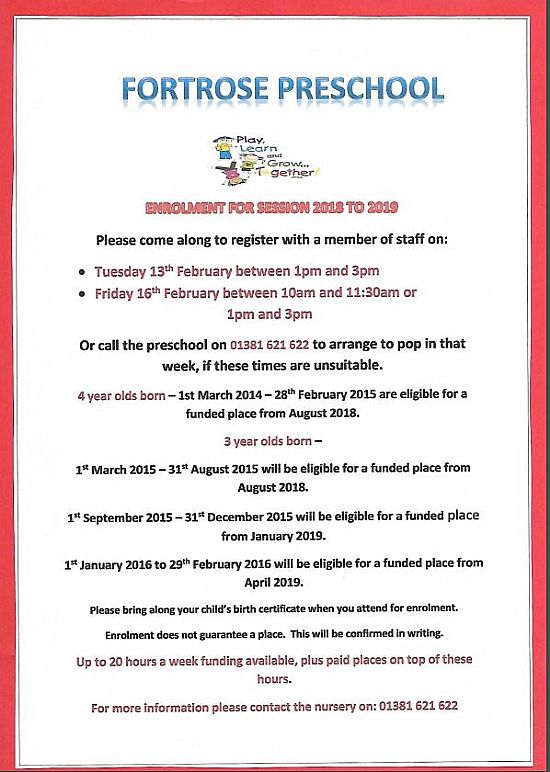 FRCC has been invited to attend a meeting to discuss the safety of the Munlochy Junction on the A9. FRCC will attend. Please send any points of concern to either Tom Heath at anisotropics@btinternet.com or directly to Kate Forbes MSP 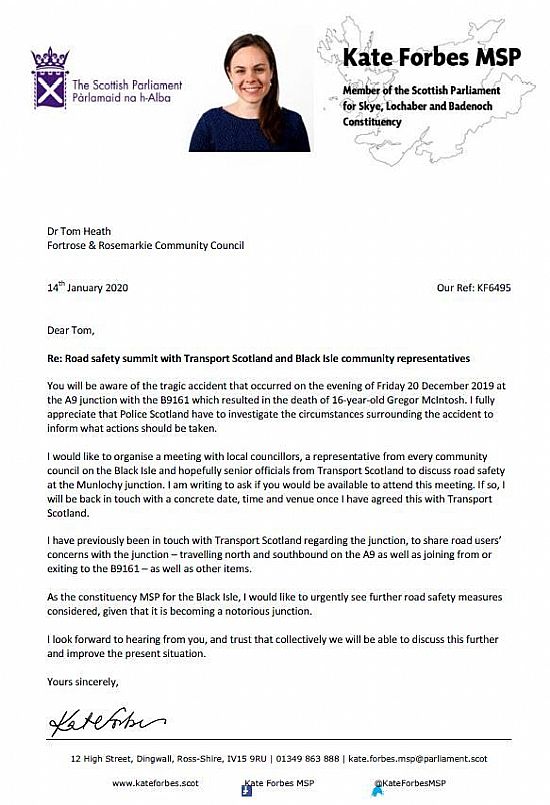 11 January 2020A little money to help the Community 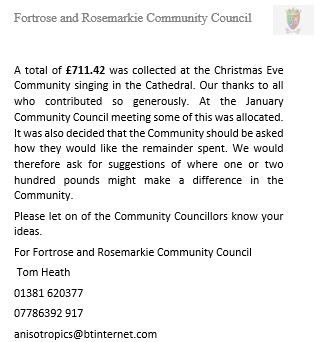